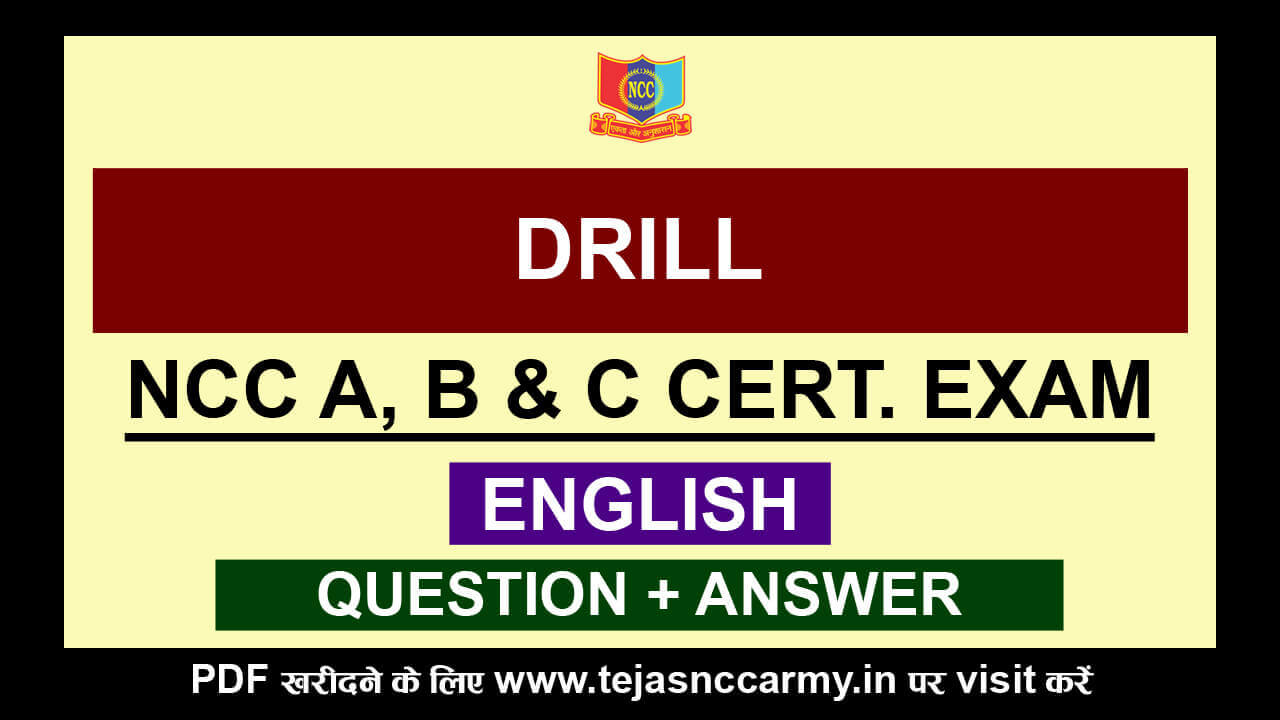 Ans :-  Any action is justified. The action to be done in a manner is called drill.

(i) Turn out and fixing bearings

(iii) To inculcate the spirit of leadership

(iv) To develop the spirit of discipline

(v) Patriotism and mingling among the cadets develop tax efficiency

(iii) The number of cadets for the President’s honor ____ it occurs.

Q. 4) What are the features of Word of Command ?

(i) Speak loudly and clearly

(ii) Speak in a simple and loud voice

Q. 5) What is the difference between rank and file ?

Rank – Cadets sit side by side in a straight line stand up.

File – In this, the cadets cover from the front in a straight line. They stand behind each other.

Q. 6) What do you understand by line break ?

Ans :-  On receipt of this order turn right and line Break it  Salute is not given on this order, The cadets live in the ground itself. This is not the end of the parade. There is a pause state.

Q. 7)  What do you understand by immersion ?

Ans :-  On this command, turn right salute ( if any If you are an officer ) after a short pause at a brisk pace Get off the ground.It’s the end of the parade is order.

(viii) Command of the right salute during high speed ______ occurs on the foot.

(ix) The distance between the two ankles at rest it occurs .

(i) The distance between the ankles in the careful position is 30 inches it happens .

(ii) Seeing the cadet 100 meters in front during the drill needed .

(iii) Word of command is given in resting position.

(iv) There are three types of drills.

(v) Butt salute is given to JCO.

10. Which dignitaries were given the  national salute goes to ?

11. What is the command word for dressing ?

(i) Right direction of rifle magazine in Bhumi Shastra is right.

(ii) The angle between the two feet in careful is 30 degrees it happens .

(iii) 12 inches step forward is taken on the right side.

(iv) Move the upper part of the waist while at rest can.

(vi) When there are less than 6 cadets, the squad is given a single rank. You can do the form-up.

(vii) The right salute is commanded on the right foot.

(viii) The order to break the line means that the parade is over has gone .

(ix) Weighing the rifle when on parade with a rifle brought in arms.

(x) Rest is ordered when The squad should be in a resting state.

(i) Where did the drill start ?

(ii) The action of running near line is done :-

Ans :-  After inspection and before march past

(iv) To what degree is it turned in the action of turning back ?

(v) To fall again after a short break Order of command is given for ?

(vi) In slow walking, the speed of the step is /min.

14. How many types of salute are there ?

(iii) to the right

16. How many inches does the foot come out in walking slowly :-

17. What is the distance between 2 cadets in fast speed.

18. On which foot the thumb is given in the word of command-

(i) The uniform is neat, lacquered and ironed should be

(ii) Shirt and pants are properly stitched and buttoned

(iii) The uniform should neither be too loose nor too tight

(iv) Shoes should be well polished and strapped

(v) The belt in the pants should be properly tied

(vi) Hair should be short and neatly cut

(vii) Beard should be properly cut

(viii) The cap should be properly fitted on the head

(i) Open Drill :- It is done during fighting

(ii) Close Drill :- It at a fixed place and is done for teaching.

(i) Right direction of rifle magazine in Bhumi Shastra is it right ?

(ii) The angle between the two legs in careful is 30 degrees It happens ?

(iii) 12 inches of step forward is taken on the right side Is ?

(iv) Move the upper part of the waist while at rest can ?

(v) The right spectator looks to the left at the behest of the sentence ?

(vi) Single rank to the squad when there are less than 6 cadets Can I do the form-off?

(viii) The right salute is ordered on the right foot Is ?

(ix) The order to break the line means that the parade is over has gone ?

(x) Weighing the rifle when it comes to the parade with a rifle brought into the scriptures ?

Ans :-  When there is a test normally, then 3 people Make a squad and go for the test, give him It’s called Squad Drill.

25. In which position does the movement work above the waist ?

Ans :-    In a comfortable position