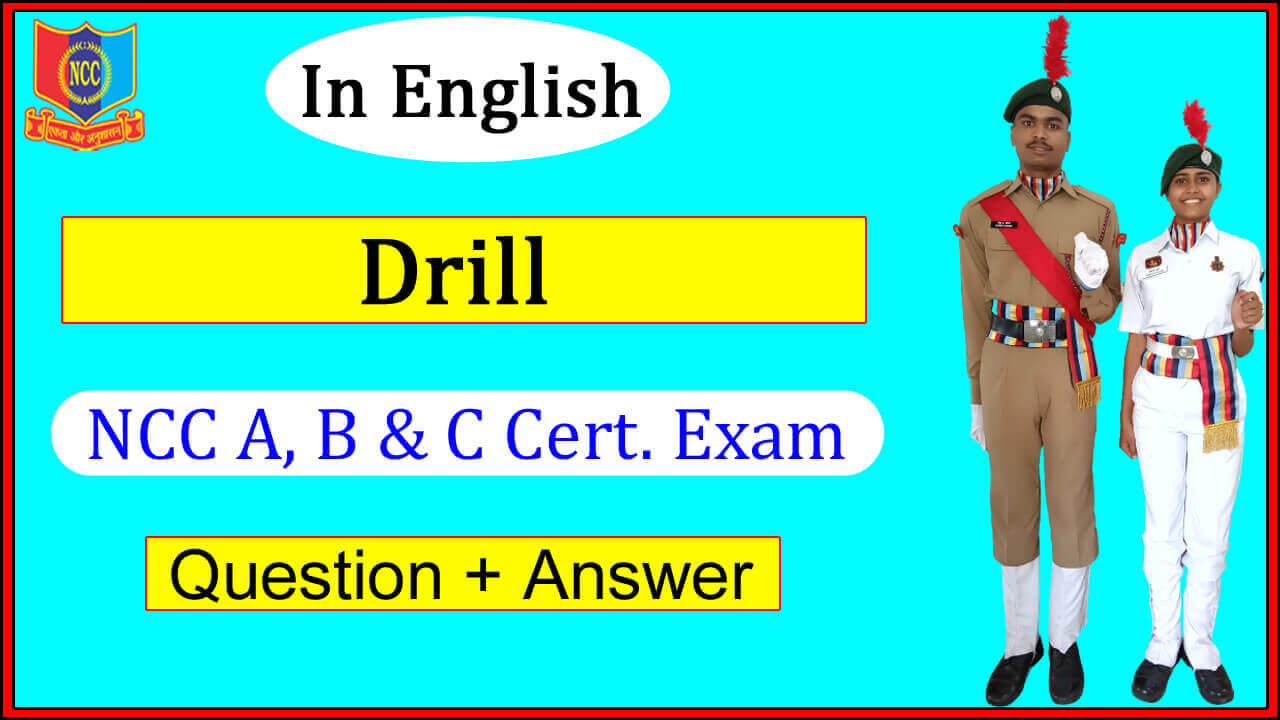 Answer :- Drill the action to take any action in a proper way it is said.

Answer :- It is done during battle in Field Area.

Answer :- It is during peace time at a certain place and for the NCC Cadets and Soldiers. It is done for teaching.

(i) Salami weapon is given from Naib Subedar to Captain ?

(iii) Turn back command is given on the left foot ?

(i) Turn out and fix bearings

(iii) To inculcate the spirit of leadership

(iv) To develop the spirit of discipline

(viii) speed up the body

(ix) To teach to dress properly

(xi) To strengthen the harmony of body and mind

(a) An angle of ……….. degree is formed between the claws in careful position ?

(a) 65 steps are taken in 1 minute while walking slowly ?

(b) If a platoon marches, only the platoon in-charge salutes and See the rest right/left?

(c) Salami should not be given at the railway station ?

(b) rolling the eye

(e) to move the fingers in the boot

(b) The distance between the ankles in the resting position is ………. ?

(i) turn out and bearings are good

(iii) the spirit of leadership is awakened

(iv) The spirit of discipline is developed

(v) In the cadet, the feeling of patriotism and the ability to work together development takes place

(b) The parade ends on the order of immersion ?

(i) The uniform should be neat, lacquered and ironed

(ii) Shirt and pants are properly stitched and buttoned

(iii) The uniform should neither be too loose nor too tight

(v) The belt in the pants should be properly tied

(vi) Hair should be short and neatly cut

(vii) Beard should be properly cut

(viii) The cap should be properly fitted on the head

(ii) The length of the step in the right-left walk is 12 inches ?

(iii) There are 4 movements by turning back in a fast walk ?

(iv) The rifle is at an angle of 60 degrees with the rifle in rest position ?

The cadets in rank stand side by side in a straight line.

In the file – the cadets follow each other in a straight line covering from front to back. stand up.

(c) During the middle to fast movement of the inspection …………. steps are taken in front ?

20. What is the difference between immersion and line break ? ( 2 )

Immersion: – On this order, salute, if there is an officer, then a little After the pause, move out of the ground at a brisk pace, this ends the parade. order to do.

Line break: – On receiving this order, turn right and break the line. But the salute is not given, the cadets stay in the ground. There is a pause rather than an end of the parade i.e. 5 minutes break of

(ii) does not fall again in immersion and the officer is not on parade It happens ?

(iv) The command of a right turn is given on the right leg ?

(v) On the order of the right Saj, three steps go to the right ?

(a) Salute in the right mood ( if there is an officer )

(b) stop by taking 3 steps forward

(c) go straight ahead and go off the ground

(ii) The number of cadets for the honor of the President is ?

(iii) to the right

(i) From which position is the word of command always given ?

(ii) A careful positioning requires turning to change the margin ?

(iii) The cadet is made to stand while sizing the height ?

(iv) How many steps do cadets walk in the open line ?

Answer :- One and a half steps

(v) Salute after walking how many steps while doing a fast right salute is down ?

28. What is the position of the standing sentry in the salami weapon and the armpit arm ? Salute to officers ? ( 3 )

Beside Arms – From Nayak Subedar to Captain

In salute – to the rank of Major and above

29. Dignitaries entitled to National Salute and General Salute write the name of ? ( 2 )

General Salute – ranks above him including Chief and Major

(i) spoken loudly and clearly

(ii) Speak in a simple and loud voice

(e) The angle between the toes in the careful position is ………… degree ?

34. The strength of the cadets for the Guard of Honor for the President and What is the structure ? ( 3 )

35. The strength of the cadets for the Guard of Honor for the Prime Minister and What is the structure ? ( 3 )

Answer :- On receipt of this order, turn right and break the line. on this order Salute is not given, cadets stay in the ground, this is not the end of the parade There is a pause state.

From Nayak Subedar to Captain Sahib

(a) The step of ………… inch is taken forward in the sentence from the right ?

(d) During the saluting weapon from arm shastra, there is a ………… movement ?

(c) There is a distance of 12 inches between the two feet in careful position ?

Answer :- When there is normally a test, then by making a squad of 3 people. When we go to give the test, it is called Squad Drill.

– in a comfortable position

Answer :- Be careful and rest

Answer: – On this order turn right, salute (if any officer) After a short pause, go off the ground at a brisk pace. it to the parade Order to end.

(a) Thumb in careful position against the stitching line on the trouser/trouser side Must be compatible ?

(b) the angle between the thumb and forefinger of the right hand while saluting Should be 15 degrees ?

(c) On command right turn we should turn 90 degree left ?

(d) The cap badge should be along the center of the forehead, between the two eyes ?

(e) In order to move fast, we should move the left hand forward ?

-To the President and the Governor

(a) Distance from heel to heel in resting position and from toes to toes Distance ………. Is ?

(c) Wall A Line Become :- When We in Parade Carat Long Right Short Bye By doing